Urgent! The U.S. Blizzard’s road closure has made the logistics situation worse! Over 70 Amazon warehouses closed! Please note when shipping

Recently, an unprecedented meteorological disaster has swept the United States. The temperature in many parts of the United States hit a record low in recent years. The road closure caused by blizzard has worsened the logistics situation. Sellers in the United States will always face a crisis of out of stock! Nearly three-quarters of the 48 states in the United States are covered by snow. Among them, Texas was the most severely affected. The blizzard paralyzed the power grid in the severe cold.

In the past few days, blizzards have recently caused disasters in the United States, ravaging the central and southern states of the United States. And it is very likely to seriously affect logistics and transportation, and it will be difficult or impossible for logistics companies to deliver goods on time. Therefore, sellers must be psychologically prepared for logistics delays.

So far, the severe cold weather has killed at least 47 people, about 4 million houses have lost electricity or water, and more than 14.6 million people in Texas alone have been affected by water cuts. At the same time, the next wave of blizzards will strike again, which may affect areas where about 100 million people live.

An Amazon spokesperson said Amazon was forced to temporarily close some facilities in eight states including Texas due to bad weather. Many FBA warehouses have been closed, and it is expected to resume receiving at the end of February, involving more than 70 warehouses. The following picture shows the list of partially closed warehouses. 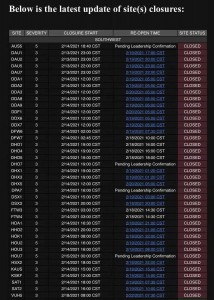 In addition, Blizzard will also affect the delivery, and some appointments have been postponed for 1-3 weeks.

It is reported that after a Chinese New Year holiday, the port congestion in California has not been eased, and it is getting worse. Container ships stopped at the Port of Los Angeles and Long Beach. Not only that, the congestion of container ships is still spreading to other ports in North America.

According to the port situation overview data released by Hapag-Lloyd earlier this week, there are 35 ships waiting in Los Angeles/Long Beach, compared with 37 ships a week ago. This figure was 30 ships two weeks ago and 32 ships three weeks ago.

Container terminals, truck companies, railways and warehouses are all “overloaded.” In order to cope with the continued congestion, container shipping companies have taken countermeasures. At present, the centralized transportation industry is facing severe congestion. The congestion of the port makes the waiting time of ships prolonged and further causes the lack of capacity.

The congestion of the port directly affected the supply of products. Nowadays, the shelves of some products in the United States are out of stock.