Amazon surpasses Wal-Mart to become the largest clothing retailer in the United States, and Shopee opens in Brazil

1. Acquiring a US company, a Canadian railway company wants to connect to North America

On March 23, the Canadian Pacific Railway Company stated on the 21st that it had agreed to buy the Kansas City Southern Railway Company for US$25 billion. Once the acquisition is completed, it will mean that the company creates and operates the first rail network connecting Canada, the United States and Mexico.

According to news on March 23, Hapag-Lloyd recently announced the acquisition of NileDutch. After the transaction is completed, Hapag-Lloyd will hold all shares in the company. Nile Shipping operates a total of 10 liner routes, deeply cultivating the African market, connecting Europe, Asia, Latin America, West Africa and South Africa, with an average annual shipping volume of 200,000 TEU. At the same time, the company has offices in 85 regions around the world, and 16 self-owned offices in the Netherlands, Belgium, France, Singapore, China, Angola, Congo and Cameroon. Hapag-Lloyd’s announcement disclosed that the total shipping capacity of the Nile River is approximately 35,000 TEU and 80,000 TEU containers.

It is worth mentioning that Nile Shipping is the fourth company acquired by Hapag-Lloyd in the past 15 years. The three previous companies were CPShips, CSAV and UASC.

3. Amazon surpasses Wal-Mart to become the largest clothing retailer in the United States

On March 23, a study released by UBS showed that Amazon has surpassed Wal-Mart to become the largest clothing retailer in the United States. This is largely due to the e-commerce boom triggered by the new crown pneumonia epidemic.

UBS data shows that in 2020, Amazon’s apparel and footwear sales in the United States increased by about 15%, reaching more than 41 billion U.S. dollars, 20% to 25% higher than rival Wal-Mart. UBS said: “This is equivalent to accounting for 11% to 12% of all clothing sales in the United States, and 34% to 35% of all clothing online sales.” UBS also predicts that Amazon’s clothing/shoes sales this year will be More than 45 billion U.S. dollars.

On March 23, the Global MRT Logistics Group recently announced that the “Global Cloud Warehouse” platform will be officially launched on March 15, 2021.

According to reports, Global Cloud Warehouse is a smart warehousing online service platform launched by Shanghai Yigang Box Technology Co., Ltd., a subsidiary of Global MRT Logistics Group, which is dedicated to import and export CFS business, and provides port CFS dynamic quotation and standardized services for the majority of international freight forwarders. In the initial stage, the “Global Cloud Warehouse” platform covered the five major ports of Shanghai, Shenzhen, Ningbo, Qingdao, and Xiamen, and provided standardized CFS services based on dynamic quotations for the international freight forwarders of these five major ports.

5. SF International joins hands with Fanhai Group to create a cross-border e-commerce cooperation project at a level of 100 million yuan

According to news on March 23, SF International and Fanhai Group formally signed a contract at the SF Fengtai Industrial Park in Hefei, Anhui. The two parties will jointly promote the development of Anhui’s cross-border e-commerce industry, establish a comprehensive, long-term, and win-win cooperation relationship, and build billion-dollar projects.

According to news on March 23, the Shenzhen Municipal Bureau of Commerce has recently reached a cooperation with the Shenzhen Institute of Standards and Hugo.com to officially launch the cross-border e-commerce market development and risk prevention and control information service system construction.

On March 23, it was reported that the China-Europe Express Bonded Logistics Distribution Center, located in the Comprehensive Bonded Zone of Guangzhou Baiyun Airport, has been officially opened. The staff will load the first batch of clothing, home appliances and other products shipped after the opening, and send them to Guangzhou Dalang Railway Station. In a few days, the goods will be sent to Frankfurt, Germany, via the China-Europe train.

According to reports, the China-Europe Express Bonded Logistics Distribution Center has opened up the transportation channel between Guangzhou Baiyun International Airport and the China-Europe Express, realizing air-rail combined transportation. The data shows that in 2020, Guangzhou Customs has supervised a total of 89.84 billion yuan in cross-border e-commerce import and export commodities, a year-on-year increase of 104.3%, achieving a doubling of growth.

On March 23, it was reported that HNA Cargo Co., Ltd. and DPD China Cargo Charter Flight Promotion Conference and Project Signing Ceremony were held in Haikou. The two parties will jointly carry out the annual scheduled cargo charter flight project from Haikou to Paris. This will be the first Hainan Free Trade Port to open. Regular intercontinental cargo flights.

It is understood that the flight type responsible for the charter flight of the project is B787-900, which travels to and from Haikou and Paris twice a week, and the two parties will carry out transportation of duty-free products and cross-border e-commerce goods in the future. The route will be maiden on March 27th.

On March 23 news, the first China Cross-border E-commerce Fair officially ended. A total of 2,363 companies from 22 provinces and cities across the country participated in the exhibition, covering 33 cross-border e-commerce platforms around the world, and 62,000 professional merchants in the cross-border e-commerce field from all over the country attended the exhibition, far exceeding the 25,000 predicted before the conference. The total number of visitors has reached 130,000.

According to incomplete statistics, this inter-trade fair reached a total of over 3.5 billion US dollars in intent during the three-day exhibition. At the same time, cross-border e-commerce platforms such as Amazon Global Store, eBay, Alibaba International Station, and Newegg, as well as regional characteristic platforms in Europe, America, Africa, and Southeast Asia, all participated in this cross-border e-commerce fair.

According to news on March 23, FedEx recently announced its third-quarter financial report for the 2021 fiscal year. The company’s revenue during the reporting period was US$21.51 billion, a year-on-year increase of 23%; net profit was US$892 million, a year-on-year increase of 183%; adjusted net profit was US$939 million, compared to US$371 million in the same period last year.

FedEx said that the severe cold weather in February reduced revenue for the quarter by approximately $350 million, but it expects continued strong growth in revenue in the fourth quarter. As of Friday’s close, FedEx reported 278.33 US dollars per share, an increase of 5.62%, and the total market value was 73.777 billion US dollars.

It is reported that the group’s revenue growth in fiscal year 2020 is mainly due to the high delivery demand brought about by the growth of global e-commerce. Its e-commerce solutions division, especially the B2C business in Europe and the United States, will increase its business volume faster than other divisions in 2020. In addition, in the fiscal year, DHL’s domestic parcel volume increased significantly, reaching a record 1.6 billion, a growth rate of 15.3%.

On March 23 news, Shopee recently announced that its Brazil station is officially open for entry. The first batch of top ten hot-selling categories will be opened. Sellers can enjoy “no platform usage fee, annual fee, no deposit, and commission-free for the first 3 months” “Homepage flash sale, homepage event exposure position” and other benefits. Statistics show that 7 out of every 10 consumers in Brazil have purchased Chinese cross-border products.

It is worth mentioning that the survey data released by the Brazilian National E-Commerce Association shows that compared with 2019, the sales of e-commerce platforms across Brazil increased by 68% last year. At the same time, the share of e-commerce in retail sales has also doubled. 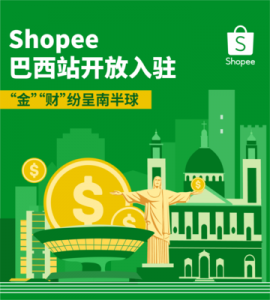